Skip to content
The Coleopterists Society » Publications » Monographs » Monograph No. 17 (2019)

The genus Asydates Casey, 1895 is redefined and revised. Scelopristis Mayor, 2004, new synonymy, is treated as a new junior subjective 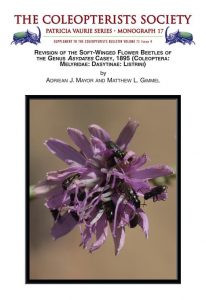